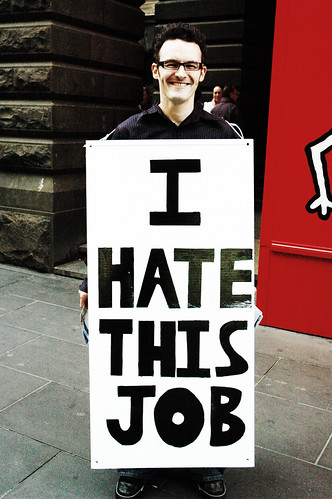 Attitudes to work are firmly lodged at the centre of any discussion about freedom.

I was recently involved in such a discussion with some friends and the overwhelming feeling was one of stuckness. I know that’s not a word but it describes what was being communicated very well.

It started with just one person raising a point that she felt that she had failed to achieve her goals and dreams. These dreams were long held and it seemed that the reason she hadn’t achieved them was based around the fact that life had caught up with her, she got married, then the kids came along and so on.

The conversation then spread around the room as person after person admitted in a kind of AA type fashion that they weren’t living the dream and that in most cases they were doing work they didn’t like or enjoy (in some cases they had given up work that they considered their identity) just to make sure that the money came in to perpetuate the life that they weren’t enjoying.

Then the reasons for needing this financial security started to come out and in many cases this was related to making sure they didn’t default on the mortgage.

So here we had a group of people who I previously assumed were working at things they loved and enjoying the work they did, only to discover that many of them had made massive compromises in their happiness (and by extension the happiness of those they held dearest), driven in large part by the self/society created pressure to be on the property ladder and to own a house.

This raised questions for me:

The main reasons people gave (this wasn’t an interview but a spontaneous discussion among a group of 12 people) for this denial of dreams were:

1. The need for Financial Security
2. Home ownership and the mortgage
3. Fear of failure

I was taken aback by all of this. I can’t say surprised as we all know that this is the lot of the majority of the people in the developed world, but I was slightly dazed at the shear scale of it among such a small group of people.

I live in the UK and in the last week we have had reports of 3 major high street retailers going into administration. Its mid January as I write this and 2 of these retailers had banked on a sales boost over Christmas to keep them afloat. Much of their Christmas sales revenue came from selling gift vouchers which the administrators are now refusing to honour. This essentially means that these companies were trading whilst insolvent and that the Directors should face legal proceedings…they shouldn’t have been selling gift vouchers or even trading if they were so close to going under. In both cases stores were closed within 24 hours meaning that thousands of people lost their jobs immediately, probably with no chance of redundancy pay as the Directors fucked up in a big way.
The people who relied on these companies for their financial security are now in the shit; what happens to the mortgage now?
That’s the trouble with jobs; business owners have all the same hopes and fears and silly dreams as anyone else. If you reveal that your business is struggling then uncertainty kicks in and failure soon follows. These guys maybe thought they were doing the right thing by holding on until after Christmas, but by being underhand about the true situation they were storing up a big, nasty and instant surprise for thousands of people. If those thousand had been self employed, doing something they loved, they would have been in control; even if their own business was struggling at least they would know about it well in advance and not be subject to a big shitty Christmas present from the boss!

In our group discussion, many people aired a desire to be doing something they loved but couldn’t afford to. This thought process is driven by 3 ingrained attitudes:

With these attitudes reinforced by years of brainwashing by government, schools and parents they can be hard to shift…change is extremely difficult for most of us.

Moving from dependence on others to complete financial independence is not something most people can do in one go. Its necessary to dig a tunnel, start in a small way, make almost imperceptible changes to your life by starting something for you, something you love to do. Forget about making money from it for the moment, just do it as often as you can, make a 30 minute space for it every day until it catches fire and starts to become a habit.

Start other projects too, make your life as diverse as you want, but don’t think of any of it as a replacement for your wages just yet. Just allow this new stuff to become habitual for now…remember tiny steps, almost imperceptible…make it easy on yourself…dig a tunnel!

The typical western human will be dead within a few decades; some get 10 of these decades, most don’t. How can we “own” stuff if death is our unavoidable fate?

Ownership of land and property is one of the major myths of the capitalist system. Here in the UK it is an obsession that doesn’t seem to bother most of the rest of Europe as much. When people speak of home ownership they are typically talking about owning the right to pay a hugely inflated price for a house by paying for it over a long period of time with interest. The tool most people use for this is called a “mortgage”. So for the majority of their best years these people are slaves to the mortgage, or in English Death Pledge!

The intricacies of the right to claim ownership of anything and the right to sell it on could maybe be unraveled and shown to be mythical if you had 2 life-times and a large team of expensive lawyers to help you, so its probably best to avoid that here. For now I think its best just to think about the futility of ownership, especially in relation to the damage it does to people’s happiness.

In the discussion I mentioned earlier someone said that she felt like a failure as she hadn’t attained one of her main life goals. This brings into question the concept of goals and their propensity to make us feel like we have failed. Given that you’ve taken care of food, shelter and heat for your family (if you haven’t…go concentrate on that for now), setting goals for yourself can be a very negative thing to do. Each time you miss one…you fail.
The other negative aspect of goals is that they usually force you to concentrate on all the wrong things or the right things at the wrong times. Instead, why not just work on the things that inspire you the most and that you feel most energised to do right at this moment. This can work beautifully with a patchwork income model.
Failure is usually thought of as a negative word, but many of the best minds in business and in the field of encouraging people to do what they love will tell you to fail big and fail often; in failure lies evolution and the movement towards success. Don’t linger on perceived failures, just move on the next thing.

Time is ticking, your stars will never all line up at once, its time to do something you love and that you will feel good about. Do many things or just one, whatever suits you best.

Don’t lose your identity to pay the death pledge and don’t try to save up the good times for retirement; some of us will get 10 decades, most of us a lot less!

Photo thanks to: Yasser Alghofily via Compfight