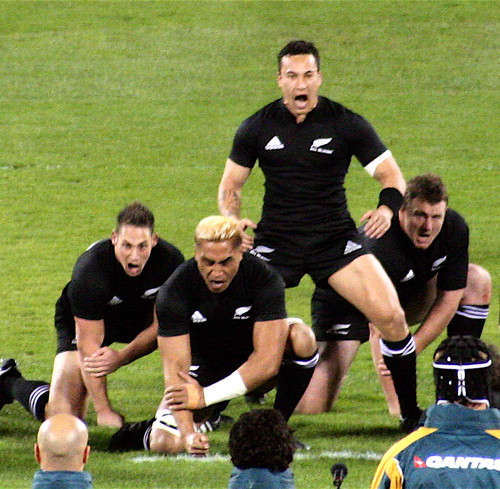 I played Rugby at school and have kept a peripheral interest in the game since. Here in the UK at this time of year we are absorbed by the 6 nations tournament where Scotland, Ireland, Wales, France, Italy and England battle it out for the grand slam over a 6 week period.

It has been said that Rugby is the Chess of the field games. It is a very tactical game and although to the uninitiated it just looks like a rabble which occasionally degenerates into a brawl, the strategy of the game is fascinating.

Its always interesting to watch the game with friends and family, some of whom are merely exploding with national pride and not exactly familiar with the rules or intention of the game.

The object of the game of course is to get the ball over the opponents try line and so a novice spectator might reasonably expect that kicking the ball up the pitch as far as you can is the obvious approach to take. Within the team there are backs and forwards. The forwards are the big guys with deformed ears who grub and brawl on the ground for the ball and the backs are the lithe, fast runners who don’t want to get their hair messed up too much. In a classically played, running game, the forwards fight for the ball, and feed it out to the backs via the Scrum Half. The Scrum Half is the one back who is allowed to consort with the forwards, they kind of accept him as a necessary evil when they have no other option but to give the ball to backs to run for a try.

You can imagine the frustration of our novice spectator then, when the forwards continually recycle the ball into rucks, feed the ball back, gain a few metres and then do it all over again time after time. There is very little running play in this situation, but sometimes it is necessary to play against an opponent like this. Scotland and England games get like this a lot of the time. They seem to be merely edging toward the try line and not really trying to make ground quickly.

The reason for this approach is to ensure that they keep possession of the ball for as much of the game as possible. Merely kicking the ball forward usually guarantees just one thing; the ball is given away to the opposing side and there then ensues a long period when they make ground slowly and have the advantage of possession. See, I told you it was like Chess on grass!

So what the hell does any of this have to do with blogging successfully?

Well, as an enthusiastic writer, freedom seeker and/or life changer its easy to get dragged off in many directions in the quest to build your all important patchwork income model. Ideas keep coming for new shiny enterprises to start that are going to contribute to your ability to stay out there, away from the conformists. Unfortunately the money is in the finishing and the shipping of the amazing stuff you create, not in the starting of more and more distractions. Before you know it you have started 4 or 5 different blogs to cover different interests and to be honest most of them just won’t get the attention they need to make them into anything special.

This is where you need to take a step back and see what, if any of these interests could be grouped together and included into one over arching theme or reason for being. Starting yet another blog or website is a bit like kicking the ball up the field to the opposition. It’s better in the long run to keep hold of the ball, to know where to focus your attention and to concentrate on finishing and shipping. Instead of punting the ball up the field to the opposition, you should try to keep hold of it and continually return to your pack of forwards (readers) for support and cover.  This approach will help you to  to gain that all important ground, even if its just a few inches at a time. Much better to do this and gain real ground; better to make real progress than to continually seek the fleeting satisfaction of the new and shiny kick up the field.

By defining a good umbrella theme for your projects and interests you can happily introduce what at first seem disconnected ideas to your reader. Remember that it is you and your personality that are the connection; it’s your quirkiness, dedication and enthusiasm that attracted those same readers in the first place. So if you can happily combine these crazy and wild ideas in your life, then showing your readers how you do it is surely a winning strategy for
you.

Remember, keep possession of the ball, return to your pack for support and protection. Concentrate on gaining ground slowly and steadily every day.

Any ideas to share, just drop me a line or use the comments below.

photo thanks to: Martyn via Compfight